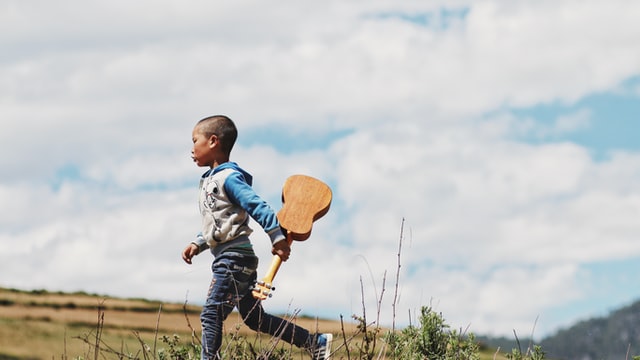 Music Can Make the World Better
by Mike Greenly

The earliest known evidence of music in our lives was the discovery of hollowed out pipes carved from the bones of birds. These “instruments” date back some 40,000 years to the caves of the Swabian Alps in Germany.

I can believe that. It’s easy to picture “cavemen” (and women) listening to their primitive music while gathered around a campfire. As I was typing that last sentence, I imagined the sound of chanting.

After all, it’s said that humans learned to control fire more than a million years ago. With the use of that primary tool for survival already discovered, it’s quite plausible that humanity would eventually have begun inventing new forms of entertainment … beyond the primitive fun of killing a mastodon for dinner. (“Me got ’em for us, Kuka. We gonna eat!”)

Surely we humans have been fans — appreciators — of each other’s talents long before the word “fan” was created. Doesn’t it make sense that some prehistoric chefs did a better job than others in cooking and seasoning the snacks of reindeer and horse? (“Taste good, Kuka! Me want more.”) We were fans of each other’s work without yet the word to express it.

Same thing with music. Dining while enjoying some form of music seems timeless. And as with cooking, some must have been better than others at creating rhythmic entertainment. (“Pound on that mastodon again, Bubba, while I beat this big rock against the cave wall! Me like what you do!”) That’s my fantasy of a primitive music fan.

Finally came the word, itself. If you research the derivation of “fan”, its meaning as a device to cool the air around us goes back to the 1550s. Using the word to denote an enthusiast for entertainment came later. That seems to have emerged in the 1800s when boxing supporters were said to take a “fancy” to pugilistic sports. It wasn’t much of a leap from there as people shared the same enthusiasm to start using the phrase “fan club.”

So how does this relate to the ways that music can make the world better? That can happen naturally because fans are influenced by the artists and performers they enjoy, respect and admire. And if an artist uses music to express a positive idea, his/her/their fans will feel encouraged to adopt that way of thinking.

There are many famous examples of the positive impact of music.

“Strange Fruit” — In March 1939, 23-year-old Billie Holiday first performed this song originally written by a Jewish civil rights activist who was inspired by the lynching of two Black men in Indiana. The lyrics were meaningful to Holiday because her own father died as a result of racial bias: despite his fatal lung disorder, he was turned away from a hospital because of the color of his skin.

“We Shall Overcome” is a gospel song that became a protest song and then a key anthem of the American civil rights movement in the 1960s. It descended from a 1901 hymn, “I’ll Overcome Some Day” and morphed into versions made famous by Pete Seeger and others. It was of course also made famous by Dr. Martin Luther King, Jr.

Also related at the 1963 March on Washington was Bob Dylan’s performance of “Blowin’ in the Wind”.

In 1964, Sam Cooke was inspired to write “A Change is Gonna Come” after he and his entourage were turned away from a whites-only motel in Louisiana.

In 1971, John Lennon asked us to “Imagine” a world where the things that divide us — religion, income levels, skin color, etc. — were no longer able to do so. The impact of his creation on fans around the world made it the best-selling solo of Lennon’s career.

That same year, at the height of the Vietnam War, Marvin Gaye’s “What’s Going On” became the lead for Motown’s best-selling album ever.

I assume we all agree that a world without war, racism and other forms of bigotry would be “better” by definition. Obviously, though, the ability of a song to achieve such social improvements depends on its ability to appeal to fans on a personal level … triggering a passionate and personal connection.

The power of music to improve the world — or more specifically, in my case, the power of lyrics — matters deeply to me. Having been a successful Fortune 500 Marketing/Communications VP, I now make my living using My Friends, the Words for executives and their teams today.

FYI, for those who don’t know, the Fortune 500 is an annual list from Fortune magazine of the 500 largest U.S. corporations. I seem to be the only freelance ghostwriter of speeches, video scripts, editorials, chapters and books who has personally lived life on the exec client’s side of the desk. Having been an exec for decades, I now get pleasure (and income) from helping today’s execs be more effective. My tagline promise to any client is, “Sound Like YOU … Only Better!”

I like to use my talent to make the world better. There are some industries, for example, for which I will refuse to work. One of the reasons I’m proud to be affiliated with Fanmire is that I believe this organization — in bringing stars and influencers together with the fans who admire them — can facilitate the potential for synergy. (I like that Fanmire is consciously focused on being a “safe” positive environment.)

There’s a similar ethic — to contribute something positive — that I strive for in writing lyrics. I can’t sing, play or compose so every song I’m part of involves collaboration. But again, as I hope you see from the songs I’ve cited above, music can make the world better.

Let me share below just some examples from different genres of how I’ve worked to contribute to the world. I’ll include a few visuals but since every song is my own, I’ll save space here and give specifics for only the most recent. (You’ll find the credits to EVERY collaborator by clicking on the link to any video of mine you may choose to visit.)

Most of all, I hope you’ll agree that these examples (among others) do illustrate the positive potential of music to improve the world for us all.

“We Can Plant a Forest” — contributed to Trees for the Future which caused 50,000 trees to be planted in under-developed countries where Big Industry strips forests and doesn’t bother to replant. https://www.youtube.com/watch?v=wQXyTVnHzsc

“I Will Carry You” — contributed to foundation to end canine bone cancer.
https://www.youtube.com/watch?v=1PjmXNa6SEg

“Our Great Virginia” — was honored to be asked to write the state anthem of Virginia, signed into law in 2015. Replaced a song about a slave (!) who wanted to go back to Virginia so he could pick cotton again for the Master.

“Love Your Own Power” — won awards for its expression of support for women’s equality.
https://youtu.be/SdLTVMoyf18

“With You” Contributed to the Alzheimer’s Foundation of America

“To Those Who Came Before Us” Partnered with the Independence Fund whose volunteers help our wounded and disabled American Vets.

“Always My Angel” Written to honor the innocent lives lost to a deranged gunman at Sandy Hook Elementary school in December 2012.

“I See You” — Chosen by Masterpiece Living as the theme of a new campaign to educe the prejudice of ageism.
https://youtu.be/GHaOsRHKkVg

“Up to Us” — Dance/Electronic collection expressing the wish shared with my album collaborators to create something positive and unifying.

My two most recent efforts —

“Let There Be Love” — Written with the hope of making our fragmented country and world less divided by COVID, politics, etc. What about paying more attention to the shared needs we have. (Example with “We Can Plant a Forest” at the top of this list, being more proactive about climate change and global warming.)

“The Music to My Life” — Wishing to offer comfort to anyone who has lost their soulmate or someone they loved very deeply.